Golf Courses
Insights
08 December 20206 min. readJack Clancy
The Dye name has long been associated with the game of golf, or more specifically, golf courses. Back in the 1960’s, when golfers walked hard fairways and unwatered rough, carrying wooden headed clubs with steel shafts, Pete and Alice Dye had their humble beginnings. From their first major project at the University of Michigan in Ann Arbor, the couple’s design influences have evolved through the years. Initially taking inspiration from Robert Trent Jones and Alister McKenzie, the Dye’s would eventually develop their own unique style. Target greens, difficult 18th’s and high lipped greenside bunkers among other trademark elements, would form the basis for a Dye course in the years to come. 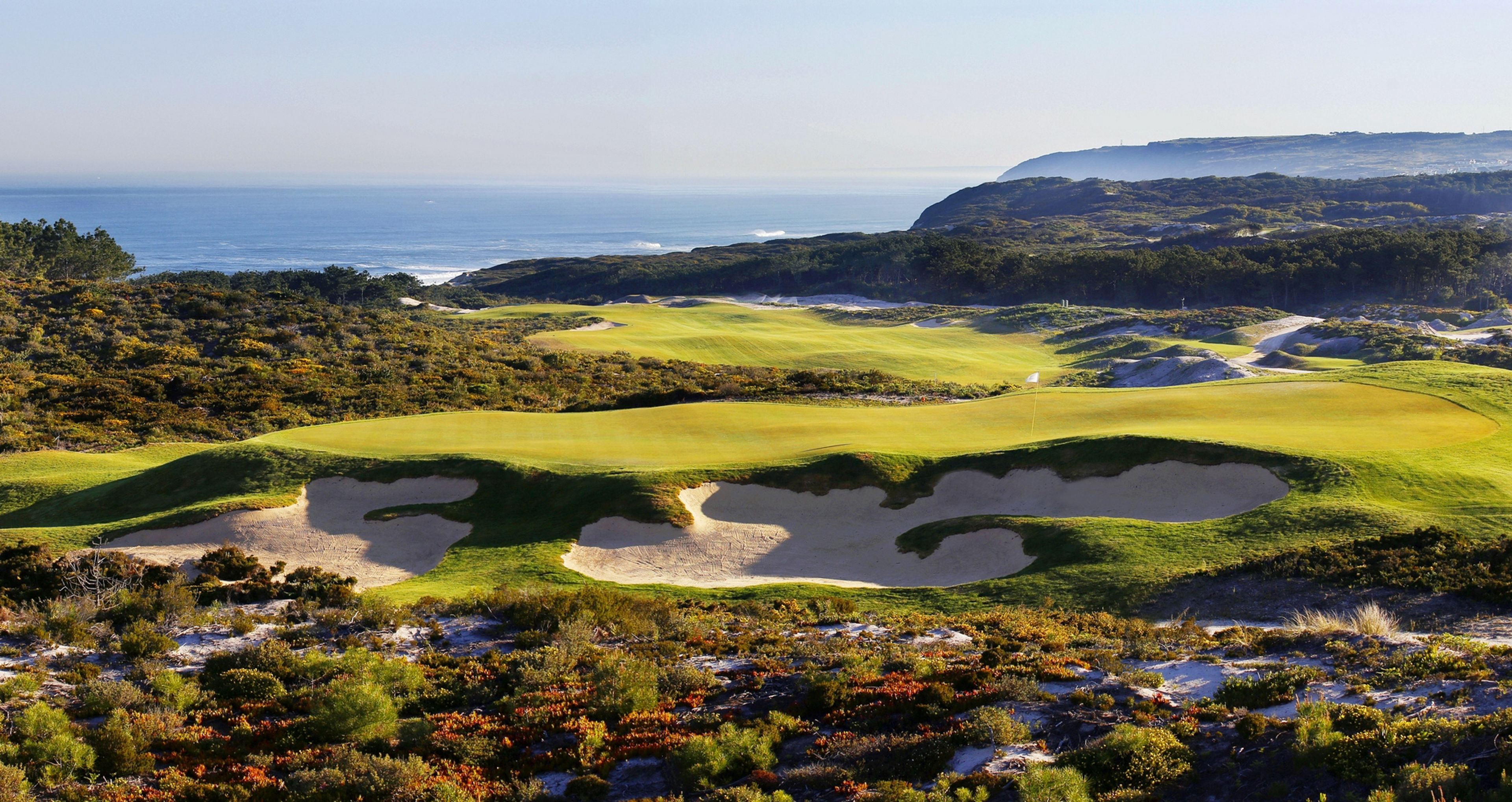 The amazing West Cliffs in Portugal, a Cynthia Dye design (photo: Leadingcourses.com)
Sadly, with Pete and Alice both passing away in recent times, it has been left to their family to carry the flag. Their two sons, Perry and P.B., have managed this task with great proficiency, while their niece Cynthia has also thrown her hat in the ring. Below we will have a quick look at this influential family before going through their top designs in Europe.

The late Paul Dye – known commonly as Pete – was born in 1925 in Urbana, Ohio. He attended school down in Florida where he was enrolled at Rollins College. It was here where he first met his wife, Alice O’Neal. Alice was an excellent golfer at the time and Pete had been known to caddy for her during several tournaments. Alice eventually racked up an impressive amateur record, winning around 50 amateur championships including; 9 State Championships in Indiana, 11 Indianapolis city championships and 3 State Championships in Florida to name but a few. The two were married in 1950 and dove into a long illustrious career of designing and building golf courses together. A career that may never again be matched by another husband and wife team.

Pete himself, also competed in a handful of tournaments from Amateur championships to a U.S. Open in 1957. Although he did finish ahead of both Arnold Palmer and a young Jack Nicklaus here, his trophy cabinet was never quite as stocked as that of his better half. Pete only began designing golf courses in his late 30s, after a successful career in sales. He and Alice joined forces to become a formidable and later world renowned team.

The Ocean Course at Kiawah, Whistling Straits and of course TPC at Sawgrass are just three of the hundred or so courses that the duo created or redesigned in their career. The legend goes that Pete had initially wanted to place a protective bunker around the famous 17th at TPC. However, Alice came up with the ‘evil’ idea of simply surrounding it with water.

Along their journey they picked up some talented protégés including the likes of Jack Nicklaus, Greg Norman, Tom Doak and Bill Coore among many others. Of course, the members of their family would also eventually take up the trade and become quite prominent figures themselves!
The 17th at TPC Sawgrass (Photo credit; user Julien Tizot)

Perry, the eldest son of the iconic pair, didn’t take long creating a name for himself in golf course architecture. Although, it’s safe to say that he started off on the the right foot. Playing in the dirt can be one of the fondest childhood memories for anybody. However, playing in the dirt of award winning, world famous golf courses, is bound to leave some impression.

Perry, would often tag along when his parents were on the job and he soon became an intern to Pete and Alice at the fresh age of 12. He assisted on the site of Crooked Stick Golf Club when he was just a teenager, and would go on to lend support in such projects as Teeth of the Dog in the Dominican Republic and Oklahoma’s Oak Tree. Perry began designing many of his own courses in Colorado around the 1980s, before forming Dye Designs in 1984.

With his new company on the rise, Perry widened his scope to eventually include Europe, Asia and much of Latin America. He has since built a strong reputation for eco-friendly designs ahead of their time. Dye Designs now has golf courses in over 14 different countries.

Paul Burke Dye is the younger of Pete and Alice’s two sons. Obviously growing up in a similar environment to his brother Perry, P.B. was exposed to golf course design at a young age. With his charismatic personality and skill on the bulldozer, it’s no surprise that he too has gone on to become a prevalent figure in the world of design. Dye’s work includes courses such as Hidden Glen in Wisconsin, Italy’s Parco di Roma, and Club de Barbaroux (below).

The ‘baby brother’ has designed courses in the Caribbean and Central America as well as South America. He has also had a few students of his own. Most notably Tom Doak, who often credits P.B. for his own success. P.B. prides himself on having no office culture and has been known to live on the job site from time to time. Also a speaker of Spanish and cancer survivor, there is more to the youngest Dye than meets the eye!

Cynthia Dye McGarey is the niece of Pete and Alice and daughter of Pete’s late brother Roy. Cynthia’s education set the the tone for her later success in the field of golf course architecture. She first attended Arizona State, where she studied landscape architecture as well as horticulture. Cynthia then made her way to Co. Tipperary, in the Republic of Ireland. It was here where she took classes in Irish literature and golf before eventually earning her diploma in Landscape Architecture and Environmental Analysis from Harvard. The now mother of five, began her career focusing on the design of landscapes for commercial and residential buildings before moving to the golf course.

Cynthia is also known to be very environmentally aware in her designs and holds an influential position in the family company, Dye Designs. Her most notable works come in the form of Promontory Golf Club in Utah, West Cliffs in Portugal (see below) and Whitehorse Golf Club outside of Seattle, Washington.

So Cynthia rounds off the impressive list of designers in the Dye dynasty. But now to the courses! Below we’ve gathered your reviews and ratings, to present a list of the Dye family’s best work on the European continent.

This list is based upon golf courses that have received enough valid reviews and are rated highest by golfers on Leadingcourses.com. These courses are all located in Europe and designed by a member of the Dye family.

Most popular spots for golf